Here are some of the matches that I liked from ONE on TNT IV that took place in Singapore on April 29, 2021. 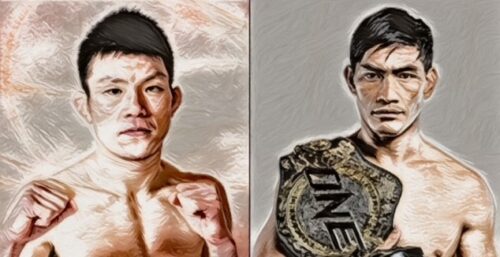 This will be our third match.
In the first match, Folayang won by KO, and in the second match, Aoki won by Submission (1 win, 1 loss), and now they have this third match.
Both fighters are 37 years old and are expected to show their maturity and advanced techniques, while Aoki is a grappler with three consecutive wins and Folayang is a striker with two consecutive losses.

In the first round, Folayang uses some sharp striking to keep Aoki in check, but then Aoki uses a left middle kick and other techniques to push Folayang back against the cage,and then quickly tackles him, ties him up for a takedown, punches from the mount position, hits the elbow repeatedly, and armbar!

Anyway, Aoki was dominant from start to finish, but his takedowns were particularly outstanding.

Once in the grapple, Aoki hugged Folayang like koala, but Folayang shifts his balance backward to get away from the koala.
At the right moment, Aoki released Koala and took Folayang down tripping an opponent with his leg.
For Aoki, even if he was taken down in a hug like Koala’s, he could take it to his specialty, ground work, from there, so Folayang was in Aoki’s thoughts when he was taken in like Koala.
It was a really great way to win.

Eddie is a former top UFC striker who moved to ONE, but his last fight(reference:[Game Analysis] ONE on TNT I： Eddie Alvarez vs Iuli Lapicus) was no contest before he could show his power.（At the time of the previous article, Eddie had lost by disqualification, but the decision was later overturned to a no contest.）

Ok, on the other hand, is a Korean fighter who has won three straight fights, but he has never fought a fighter as strong as Eddie, so the odds were in Eddie’s favor.

From the first round of the fight, Eddie pressured Ok from the stands, but during the stand-up battle, Ok’s punches hit and from there, Eddie went down and Ok punched and punched on the ground.
It would not have been at all surprising if the referee had stopped the fight at this point.
Eddie fought back in the second and third rounds as the damage wore off, but he could not land many effective shots, and Ok won by decision.

Aside from the match, what caught my attention was the change in Eddie’s fight style.

Originally, Eddie was a street fighter, so his fighting style was more of a striking style with the occasional well-timed tackle. In both the second and third rounds of this fight, Eddie was persistent in grapping his opponent and then tiring out with cage wrestling.
In other words, rather than going for the KO, he seemed to be trying to wear his opponent down and eventually win by guts.

In other words, at the age of 37 (as of April 2021), which is old for an MMA fighter, he seems to be changing his style, for better or worse, to increase his fighting methods and aim to win with his overall strength rather than aiming for a one-shot KO.

However, he seems to be past his prime, as he has a win, three losses, and a no contest in his last five fights and has been beaten down in four of them.
That’s why I’d like to see Eddie Alvarez show what he’s made of in his next fight against a strong opponent.

In this article, I have picked out some of the most interesting matches from ONE on TNT IV.

By the way, the ONE on TNT series, which is a challenge to the U.S., will end with this tournament.

There were many controversial fights, big upsets, foul play, etc., but I’m curious to see how the U.S. reaction was, and how ONE, Asia’s largest fighter, will develop in the future.

[Game Analysis] ONE on TNT I： Eddie Alvarez vs Iuli Lapicus

This is an analysis of the Eddy Alvarez vs. Yuri Lapics match from ONE on TNT I on April 8, 2021. It points out three problems with the match and introduces tactics to take advantage of loopholes in the rules.