How was mixed martial arts born?

In this article, I will write the first part of the world history of MMA.
However, there are many theories about the history of MMA, and if you really want to get down to the nitty-gritty of MMA world history, it would become an academic subject,

so I’m not going to focus on the accuracy of the information in this series.

I remember that the term “MMA” began to take root in the minds of martial arts fans in the early 2000s, when the world’s MMA center was in Japan (PRIDE). Of course MMA existed before then, but it was mainly called “mixed martial arts”. Mixed martial arts can be considered near-equal to MMA, or roughly the same (the subtle differences will be discussed later). 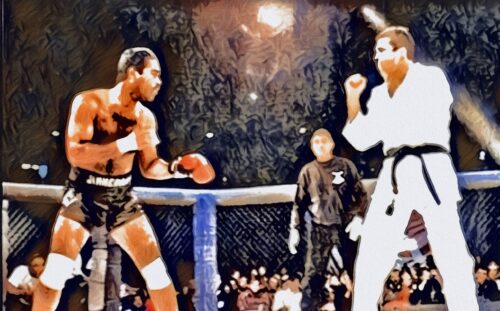 The literal translation of NHB and Vale tudo is “no limits” or “anything goes (martial arts)”.
Incidentally, while “NHB” is an English word, “Vale tudo” is a Portuguese word used in Brazil and other countries.
Isn’t MMA also an “anything goes” martial art? In reality, however, it is not really an all-or-nothing sport, as biting, metal strikes, hair pulling, etc. are clearly prohibited.

The term “heterogenous martial arts” refers not to the type of martial arts, such as “NHB” or “Vale tudo,” but rather to the matchmaking and composition of matches between different kinds of martial artists.
For example, a match between a boxer and a judo practitioner, or a karate fighter and a sumo wrestler, is a match where anything goes, but the boxer’s attacks are biased toward punches, and the judo practitioner’s attacks are biased toward throws and strangles. However, in the process leading to modern MMA, the integration of “striking, grappling, and submission” has developed dramatically, allowing boxers to use powerful throwing techniques and judo practitioner to use high-precision punches.

Why Mixed Martial Arts and MMA are Nearly Equal

In this article, we have dug into the roots of MMA, and in the next article, we will introduce the history of MMA and how its technical systems have developed.

A look at the early days of mixed martial arts (MMA), featuring representative fighters of the time such as Hoyce Gracie.